Almost every day we see a new example of the way women and men are judged differently as leaders.

Few know this better than former Prime Minister Julia Gillard, who is now Chair of the Global Institute for Women’s Leadership (King’s College, London). In this role she has co-authored Women and Leadership (with Ngozi Okonjo-Iweala), a lively analysis of the influence of gender on women’s access to positions of leadership, the perceptions of them as leaders, the trajectory of their leadership, and the circumstances in which it comes to an end – featuring interviews with Jacinda Ardern, Hillary Clinton, Theresa May, and others.

For this special event, Ms Gillard will be in conversation with journalist Amanda Ducker to discuss her book, the under-representation of women in leadership roles, and what can be done about it.

Ms Gillard will not be signing copies of her book after the event (due to COVID restrictions). However, you will still be able to purchase a pre-signed copy of the book afterwards.

Julia Gillard served as Prime Minister of Australia from 2010-2013, the first woman to ever serve as the country’s Prime Minister or Deputy Prime Minister. Ms Gillard received worldwide attention for her speech in Parliament on the treatment of women in professional and public life. She currently serves as the inaugural chair of the Global Institute for Women’s Leadership at King’s College in London.

Amanda Ducker is an independent journalist focussed on ideas, community, futurism, books and writing, travel, environment, and the arts. She was the founding editor of TasWeekend, as well as an associate editor for The Mercury. 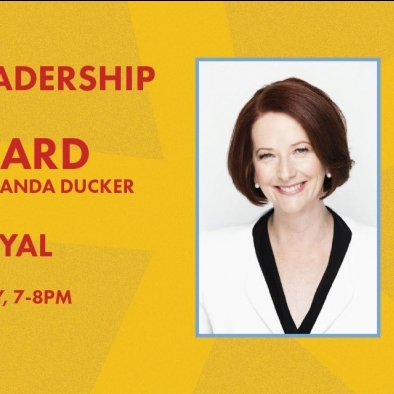