The Multicultural Comedy Gala is a side-splitting celebration of Australia’s rich cultural diversity, by a world-class selection of the most acclaimed and celebrated comedians in the nation.

This star-studded line-up will poke fun at everything that makes us different, but so much the same.

So, do your soul a favour and treat it to a night of laughter you’ll never forget!

DILRUK JAYASINHA (RECIPIENT - Graham Kennedy Award for Most Popular New Talent, 2018) hails from Sri Lanka and is one of the most in demand headliners on the Australian and international comedy scene. He has recorded two hour-long specials, for the ABC and Amazon Prime - released globally in 2020.

GEORGIE CARROLL (WINNER - Best Comedy Adelaide Fringe 2022) is a UK-born Comedian, Author, and Registered Nurse. Georgie is a national sell-out act, with a recorded special for Network Ten; The Gloves are Off. Her much-anticipated book Off The Charts was published to acclaim in 2021.

KHALED KHALAFALLA has performed to royalty in the Middle East, Australian troops in Afghanistan and at the invitation-only NYC Festival. As an actor, he has graced our screens with scene-stealing roles in Upper Middle Bogan (ABC), Ali’s Wedding (Netflix), and Utopia (ABC).

TING LIM (NATIONAL FINALIST – MICF RAW) is an emerging Singaporean comedian who has shared the stage with comedy legends, including Jimeoin – most recently featuring on an episode of Waltzing Jimeoin (Network 10). 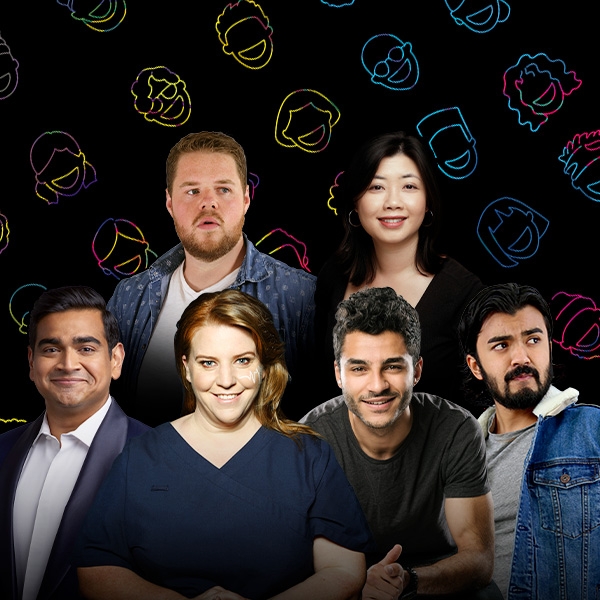 The performance entails use of strong language and strong sexual references