All aboard and set sail on the fun-ship Anything Goes!

Musical Theatre Crew is overboard with excitement to present the hilarious and de-lovely Anything Goes at Theatre Royal’s brand new and intimate Studio Theatre. This marvelous musical is the follow-up to Crew’s acclaimed production of Les Miserables earlier this year on the Theatre Royal Mainstage and is part of Musical Theatre Crew’s continuing celebration of 10 years as Hobart’s leading musical theatre training school for young people.

Reno Sweeney, a former evangelist turned nightclub singer who is about to set sail on the US American from 1930s New York to England, adores stock-broker Billy, who is in love with ‘out-of-his-league’ American heiress Hope, who is engaged to English Lord Evelyn, who in turn is smitten with Hope and all things American! Billy’s boss, millionaire Whitney is also sailing on the US American and orders Billy to go to Wall Street and urgently sell his shares just as Billy discovers that Hope will also be aboard the same ship. As the ship’s horn sounds, Billy decides to stow away and pursue love only to discover he has fellow stow-aways who are gangsters being pursued by the FBI. It’s going to take wit, cunning disguises, and fast-tapping footwork to avert shipboard disaster – anything goes so that love can win the day!

The magical Cole Porter score will be played by a cracking band of local musicians led by Drew Castles with Crew’s principal accompanist lestyn Parry on keys. The show features glorious songs including I get a kick out of you, De-lovely, You’re the Top, Blow Gabriel, and the title song Anything Goes.

Musical Theatre Crew’s Senior Performance Ensemble is a troupe of talented and dedicated young performers aged 15-18 years who are passionate about musical theatre. The ‘Seniors’ are double-cast in this show and will perform the array of characters including the iconic roles of Reno Sweeney will be shared by emerging stars, Cecilia Hutchinson and Carla DiDomenico (performed on Broadway by Ethel Merman, Patti LuPone, and Sutton Foster). We are delighted to have the fabulously entertaining Crew Alumni Tom Hawkey returning to share the role of Billy Crocker with Crew Scholarship winner, Max Baldock, alongside the rest of the fabulous cast.

Stow-away with this funny, stylish, and entertaining show featuring stunning costumes, a swinging band, and dazzling performances from young, emerging Tasmanian talent who guarantee Anything Goes will be a wonderful, fun voyage to the theatre!

PERFORMANCE TEAMS
(Note: Most principal roles are double-cast, with performance dates listed below for both casts)

Music and Lyrics by Cole Porter 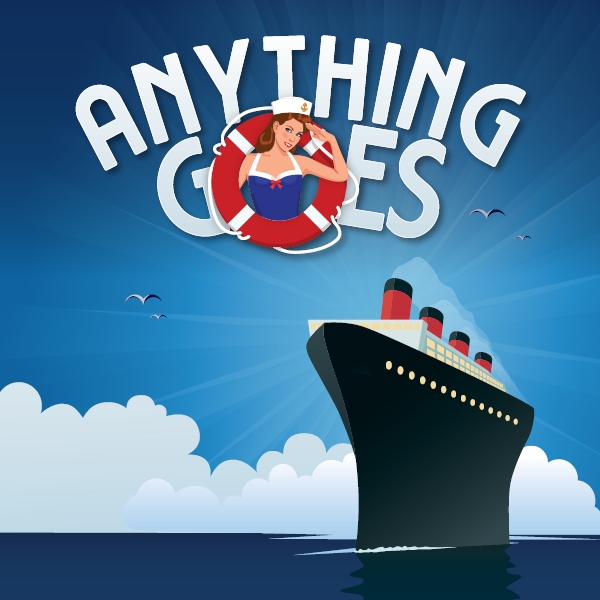 suitable for all ages.